Listen to the companion podcast episode.

It might be a little late in the year for this, but I thought I'd take a look back at my 2016 earnings and break down how much each vendor contributes. 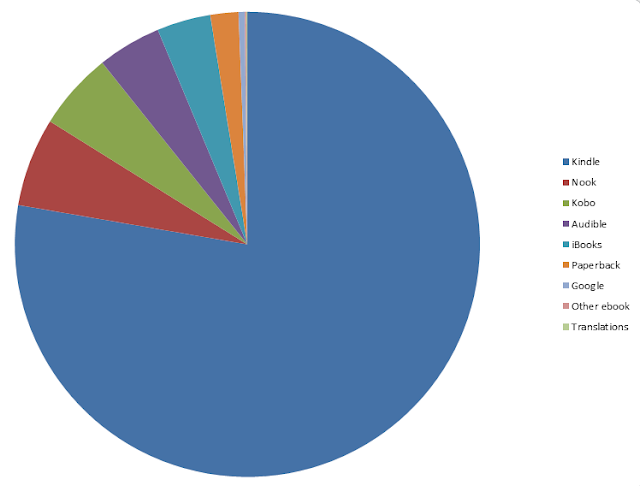 As expected, Kindle was, by far, my most lucrative channel, accounting for more than three times what I earned from all other formats and platforms combined. It breaks down like this:

-Though my non-Kindle earnings seem small by comparison, I still earned a great deal more on my non-Kindle sales than I did in my previous day job.

-Nook earnings slightly declined over the course of the year.

-iBooks earnings were up and down, but ended the year on an upward trajectory.

-Paperback earnings include both Createspace and Ingram (LSI and Ingram Spark).

-Since print-on-demand paperbacks are high-priced compared to their mass market counterparts, I generally price my paperbacks as low as possible. It might be worth experimenting with higher price points.

-I didn't join Google Play until the beginning of the year, and at first, I found their interface confusing, so I was lazy about listing my books. I think I finally have it down. That said, even the best months at Google Play barely surpassed 20% of the other, non-Amazon, ebook retailers.

-I have been using Bablecube to sell translations of my books. Unless I can develop some effective marketing strategies, it might be wiser to hold on to rights and wait for translation offers.)

Looking Ahead
-Several of my author friends tell me they are doing very well on iBooks. I'd like to increase my sales and visibility in that store

-I'm curious to see whether or not the lending program Kobo is beta testing will have an impact on sales.

-Rumors are circulating that Audible plans to roll out an audiobook lending service, which will also be interesting to watch.

-With the launch of the Dane Maddock Kindle World, I expect Kindle income to continue to rise in proportion to the other vendors.

-I am strongly considering going exclusive with Createspace, as the paltry sales through Ingram mean the annual listing fees for all books in my catalog aren't worthwhile.

Overall
On the whole, 2016 was a solid year. I was disappointed that, for the first time in many years, my units sold decreased, as did my income. I can attribute this to a lack of new releases in 2016, especially no new Dane Maddock main series book, which is my bestselling series. (Xibalba almost made it in at the end of the year, but I wound up publishing it the first week of 2016 instead.)
I also had to wait for Cohesion Press to publish Primordial. Had it been an indie book, it would have been out in early 2016.

I expect this year to  be better. I've been more productive, my co-authors are working hard, and the Kindle World has done very well. Fingers crossed!