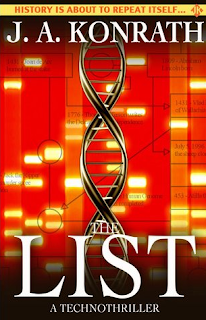 The List was my first JA Konrath novel and remains my favorite. Action, humor, science, and history blend for an entertaining read.

A billionaire Senator with money to burn...
A thirty year old science experiment, about to be revealed...
Seven people, marked for death, not for what they know, but for what they are...
The List by JA Konrath
History is about to repeat itself

The Listis a riveting mystery-thriller with a sprinkled with a generous dose of humor. When police office Tom Mankowski investigates the scene of a grisly murder, he discovers that he and the victim have something unique in common. As he digs deeper into the mystery, he encounters deadly killers, a heretofore unexpected miracle of science, and history come to life.

It's difficult to say much more without spoiling the story. Suffice it to say, The List kept me up late for a few nights running. Konrath's humor comes through very naturally, and adds to the characterization without detracting from the story or diminishing the intensity of the deadly situation in which the characters find themselves.

The List contains a smattering of graphic language and violence, and some of the humor is far from politically-correct. Personally, I didn't take offense at the content- I choose to write "PG" books, but I don't mind reading books that are the equivalent of an "R"-rated movie. If you're looking for an exciting thriller told at a blistering pace, check out The List.
Posted by Dave at 3:53 PM