Stone of Fire by JF Penn 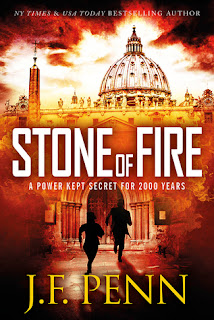 A power kept secret for 2000 years. A woman who stands to lose everything.

India. When a nun is burned alive on the sacred ghats of Varanasi, and the stone she carried is stolen, an international hunt is triggered for the relics of the early church.

Forged in the fire and blood of martyrs, the Pentecost stones have been handed down through generations of Keepers who kept their power and locations secret.

The Keepers are being murdered, the stones stolen by those who would use them for evil in a world transformed by religious fundamentalism.

Oxford University psychologist Morgan Sierra is forced into the search when her sister and niece are held hostage. She is helped by Jake Timber from the mysterious Arkane, a British government agency specializing in paranormal and religious experience. Morgan must risk her own life to save her family, but will she ultimately be betrayed?

From ancient Christian sites in Spain, Italy and Israel to the far reaches of Iran and Tunisia, Morgan and Jake must track down the stones through the myths of the early church in a race against time before a new Pentecost is summoned, this time powered by the fires of evil.

The first in the ARKANE series, Stone of Fire is a fast-paced thriller that explores the edges of faith against a backdrop of early Christian history, archaeology and psychology.

Stone of Fire is a fun action-adventure story in which the main character, Morgan Sierra, is on a quest to recover the Pentecost Stones- stones collected by the disciples from the empty tomb of Jesus Christ. Morgan is joined by members of the covert group ARKANE, and hounded by the sinister group Thanatos, in a race against the clock to recover the stones and save her hostage sister before Pentecost.

Stone of Fire is a light read, and very fast-paced, with shades of Dan Brown and James Rollins' influences evident. My favorite element is the concept of the Pentecost Stones. I love a good MacGuffin, particularly one that has a Biblical tie-in. The stones are purely of Penn's creation, yet entirely believable. Penn also includes jaunts to fascinating locations, another "must" for me in a good adventure story. I did find myself wishing for more, especially in the first half of the book. There were many places in which I wanted greater detail, deeper exploration, or a few more bumps in the road. In all, Stone of Fire is a thrill ride for adventure fans. I'll definitely give Penn's next book a try.
Save
Posted by Dave at 4:01 PM