Review: Murder in an English Village by Jessica Ellicott

I picked up the audiobook version of Murder in an English Village on a whim. (I think Audible might have had it on sale but I can't remember). It's not my usual fare, but I enjoy the occasional mystery novel, I like history, and I love British mystery shows like Foyle's War, Hinterland, and Broadchurch, so I thought I'd give it a go. I was not disappointed. 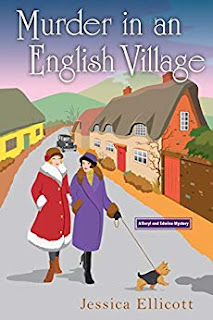 When two old school friends reunite in post-World War I England, their investigation into a young woman's disappearance leads to murder. Their search uncovers a variety of secrets, some dating back to the war years.

The pacing is slow and steady, but seemed about right for this type of story. The characters are interesting and the mystery intriguing with just enough twists and surprises to keep the pages turning. Like any good mystery, there were several times I was fairly certain I knew who the killer was (and I was wrong every time.) When I  neared the end of the book, I was particularly proud of having figured out that one particular person was no good, but then it turned out that I'd only figured out a tiny fraction of the real story. The conclusion wrapped everything up in a satisfying way that didn't leave any loose threads.

I particularly enjoyed the dialogue. The characters' vocabularies, idioms, and manners of speaking were appropriate to the time, place, and their respective social classes. In one of my favorite lines, one of the characters bemoans her friend's cooking skills, thinking that, "What had been done to the sausage was a bigger shame than the fate of the pigs that had provided it." I could almost see the Dowager Countess from Downton Abbey making such an observation.

The narration by Barbara Rosenblat is solid and her performance added to my enjoyment of the story.

Murder in an English Village is an engrossing tale certain to please cozy mystery fans.

This is the first book in the Beryl and Edwina Mysteries series, with the second book, Murder Flies the Coop, coming out next month.
Posted by Dave at 1:08 PM