Here's the breakdown by vendor and source of my 2017 publishing income along with comparisons to 2016: 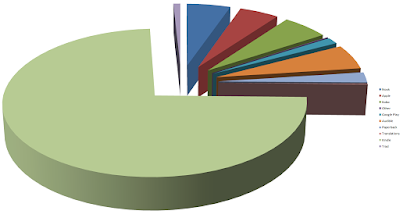 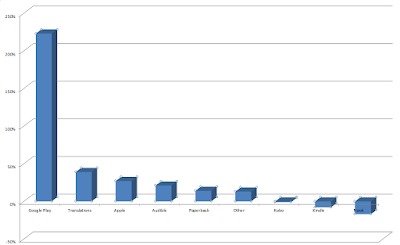 Observations
-Kindle decrease is primarily attributed to the amount of time and effort invested in Kindle Worlds. Those books sold well, but brought in much less per-unit sold than books I published myself. Also, most were underpriced, in my opinion.

-I was pleased to see income from iBooks (Apple) increase.

-Audible increase is primarily due to sales of audiobook bundles as well as terrific sales of Primordial.

-I'm not sure why paperback income increased, but I'm not complaining.

-Google Play increased significantly. This is mostly due to the fact that I didn't have my full catalog in GP in 2016, but I do think their market share is growing.

-Nook income fell, which is not surprising to me.

-Income from translations and from "other" channels (Scribd, Tolino, Overdrive...) increased, but the income from those channels are so small that the changes aren't statistically significant.

Looking Back at Last Year's Musings

Last year: Several of my author friends tell me they are doing very well on iBooks. I'd like to increase my sales and visibility in that store.

Mission accomplished! 27% increase in gross income and a modest increase in market share.

LY: I'm curious to see whether or not the lending program Kobo is beta testing will have an impact on sales.


Not yet. At this time it's only available to a couple of countries.

LY:Rumors are circulating that Audible plans to roll out an audiobook lending service, which will also be interesting to watch.


As far as I'm aware, this is still limited to the romance genre and authors have been unhappy with the compensation.


With the launch of the Dane Maddock Kindle World, I expect Kindle income to continue to rise in proportion to the other vendors.

-I am strongly considering going exclusive with Createspace, as the paltry sales through Ingram mean the annual listing fees for all books in my catalog aren't worthwhile.

I did cancel a number of titles with Lightning Source, but I have been experimenting with Ingram Spark. Rumors are circulating that CreateSpace will be going out of business. We'll see what happens.


Looking Ahead
-I expect Google, iBooks, and Audible to continue to grow.

-Not sure what to expect from Kindle. I'm still in the process of republishing the Kindle Worlds books. I'm hopeful they'll perform better now that I can control the advertising.

-I'm interested in seeing what happens with CreateSpace. I will probably experiment with KDP print because you can run AMS ads for print books published with them.

-Indie-published translations have not been worthwhile so far. This year, a single advance on one translated book earned four times as much as I made from my entire catalog of translated works in 2017. I might cancel my translations once the contract terms expire and see if I can sell rights to foreign language publishers.