The Magicians by Lev Grossman

Quentin Coldwater is brilliant but miserable. A high school math genius, he’s secretly fascinated with a series of children’s fantasy novels set in a magical land called Fillory, and real life is disappointing by comparison. When Quentin is unexpectedly admitted to an elite, secret college of magic, it looks like his wildest dreams have come true. But his newfound powers lead him down a rabbit hole of hedonism and disillusionment, and ultimately to the dark secret behind the story of Fillory. The land of his childhood fantasies turns out to be much darker and more dangerous than he ever could have imagined. . . . 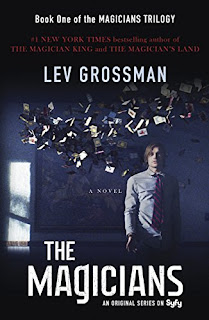 Read a review of The Magicians and, odds are, the reviewer will make a comparison to Harry Potter. Don't buy it. Yes, the story begins with a young man learning he's a magician, heading off to a magical university, making friends, and developing his powers. I emphasize "begins with" because all of this happens in a few hundred pages. Imagine Harry Potter if: all the years at Hogwarts were compressed into the first half of the first book; then Harry and crew move to New York, where they spend their time drinking, having sex, and feeling depressed. Harry spends a lot of time brooding over how sad and pointless live is, how he doesn't really have feelings for Ginny any more, and magic hasn't made his life any better. Voldemort makes a very brief appearance early on, one which no one really understands or thinks about until he shows up again at the book's climax.

This is not to say The Magicians is a bad book. Just don't go into it looking for Harry Potter. I tried reading it shortly after its release, and didn't finish it, possibly because I was looking for something like HP. After trying The Magicians television series on NetFlix, I decided to give it another try, and found I enjoyed it for what it is. (I confess I prefer the show to the book.)

What I found most interesting about The Magicians is its main character, Quentin Coldwater. He's unhappy, dissatisfied with life, seldom heroic, not easy to like, but easy to root for. He's probably the most honest representation of the introverted fantasy novel lover that I've seen in fiction. Many of us find ourselves wishing Hogwarts (or insert your favorite fantastic setting) was real, and daydream about what it would be like if we could live there. Let's get real: if the average bookish, introverted, depressed person got to go to Hogwarts,  (s)he might enjoy aspects of it, but would still be the same shy, unhappy person on the inside, and would spend a lot of time in her/his dorm room or the library, reading and daydreaming about the magical world outside of school. That's Quentin. He's a bit of a downer, but his struggles are real, and he's the same jerk even after he discovers magic.

Overall, I liked but didn't love The Magicians. It was a bit slow, but good enough to keep me reading. I didn't, however, enjoy it enough to dive into books two and three, though I might read them one of these days.

Buy The Magicians here
Posted by Dave at 1:00 AM